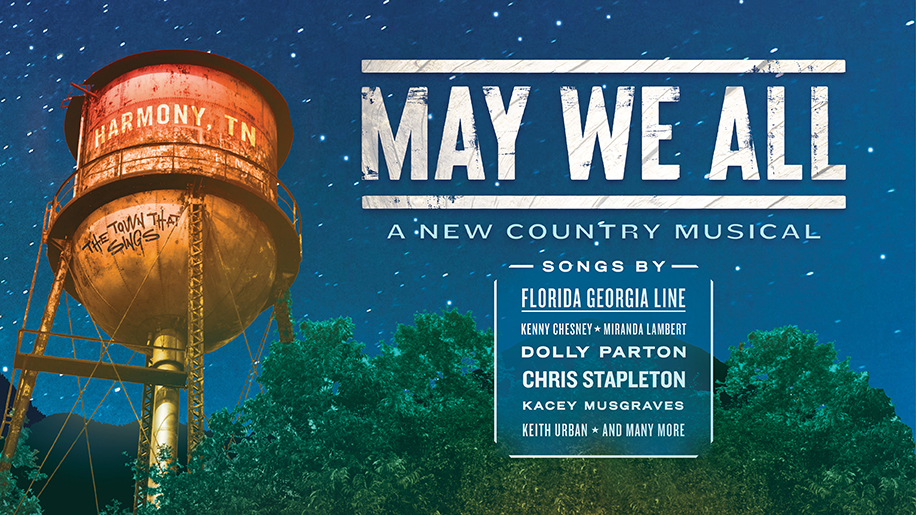 May We All save the date for Summer 2022, as Brian Kelley and his production company CuzBro Productions, in partnership with Lively McCabe Entertainment (Executive Producer Michael Barra), welcome the highly-anticipated Country musical to Tennessee Performing Arts Center.

“I’ve been dreaming and scheming on a musical for a while now, and for MAY WE ALL to debut in Nashville next June is so surreal. It wouldn’t be a Country music party without some special guests and surprises,” shares Brian Kelley. “I’m thrilled to welcome my friends and fellow artists to the cast and can’t wait to see what each one brings to the character of ‘Bailey Stone.’”

Executive Producer Michael Barra adds, “From the very beginning, we created the role of ‘Bailey Stone’ to be played by a different guest artist at every performance in Nashville. We’re already blown away by the caliber of talent and are looking forward to making these special guest moments fun for both the artist and the audience.”

May We All is the story of Jenna Coates, a small-town girl whose big-city singing career is over before it even begins, and how she returns to the people and the places of her past to find a path to the future. But going home is never easy. A lot has changed in Harmony, Tennessee, since Jenna left and not necessarily for the better. If Jenna and her hometown are going to dig themselves out of their current crises, they’re going to need each other. And they’re going to need music.

“We are thrilled to host the world premiere of MAY WE ALL at Tennessee Performing Arts Center next summer, and to be a part of this exciting collaboration,” says Jennifer Turner, TPAC President and CEO. “In Nashville, you never know who is going to appear on the many stages around town. With this impressive list of guest artists making each performance a one-of-kind experience, this engagement is no exception. It’s the perfect fit for Music City.”

Lively McCabe Entertainment and CuzBro Productions developed the stage musical in partnership with BMG. The previously announced developmental production of May We ALL at Playhouse on the Square in Memphis, Tennessee, will proceed in January 2022.

May We All features a book by Troy Britton Johnson, Todd Johnson and Eric Pfeffinger, with arrangements and orchestrations by Brian Usifer, and is directed by Shelley Butler. Joining the creative team is Geoffrey Ko (Music Director), Lauren Helpern (Scenic Design), Lex Liang (Costume Design) and Zach Blane (Lighting Design) with more to be revealed.

Earlier this year, the producers also confirmed that a film adaptation is in the works, directed by Andy Fickman (“She’s the Man,” “Parental Guidance”). Information on the production, cast and creative team is coming soon.

BRIAN KELLEY (Producer). Best known as the Florida half of the record-setting superstar duo Florida Georgia Line, Ormond Beach-native Brian Kelley is now embarking on a sandy solo adventure. Making a splash with debut album, SUNSHINE STATE OF MIND, the chill-Country champion is capturing his lifelong connection to the Florida coast. Co-writing and co-producing the project alongside Corey Crowder for an elevated version of his typical party-ready FGL energy, the set matches Kelley’s anything-goes ethos with a new sunshine-Country strut, as a partnership between Warner Music Nashville and Kelley’s Nashville South Records, Inc. It’s the latest piece of a creative empire which has already made Kelley and his FGL partner, Tyler Hubbard, one of the best-selling Country duos in history, and true business moguls. Alongside a chart-topping catalog that includes 2020’s LIFE ROLLS ON (BMLG Records), 19 career #1 hits, and being the only act to achieve two RIAA DIAMOND-certified singles in Country music history (“Cruise” and “Meant to Be” with Bebe Rexha), the pair maintain thriving business initiatives in addition like FGL House, meet + greet, Round Here Records, Tree Vibez Music, Old Camp Whiskey, and Wolf Moon Bourbon (with Jason Aldean), plus a reputation as electrifying, stadium-thrilling headline performers. Diversifying his enterprise, Kelley is also hands-on with projects like upcoming musical and feature film, both titled “MAY WE ALL” with his production company CuzBro Productions; cult-favorite brand Tribe Kelley with wife Brittney; and a partnership with Oyster City Brewing Company.

CuzBro Productions (Producer). A creative powerhouse emerging in television and film production, CuzBro Productions was formed as the brainchild of Florida Georgia Line’s Brian Kelley (Co-Founder and Principal) and his cousin, actor Stephen Snedden (Co-Founder and President of Production), with writer Justin Halliwell serving as Partner and President of Development. Rooted in hard work, passion and authenticity, CuzBro Productions is dedicated to conveying compelling original stories and creating vivid, authentic worlds with inspired programming that speaks to the heart and humanity of all viewers. Represented by WME, the newly launched company has several television and film projects already in the works, with details expected to announce soon.

Lively McCabe Entertainment (Producer). Led by producer Michael Barra, this global live stage production company specializes in packaging and adapting iconic intellectual property into new stories for theater, film, and television. Projects include the stage adaptation of “Clue” – which is currently the most-produced play in the U.S. – based on the iconic Paramount Pictures film and Hasbro board game. Other projects include the stage musical adaptation of the MGM film “Mystic Pizza,” the musical “Punk Rock Girl,” with a book by Joe Iconis (“Be More Chill”) in partnership with BMG and featuring artists such as Blondie, Avril Lavigne, Pat Benatar, Joan Jett and Gwen Stefani, and multiple television projects based on music IP set for this season. Visit www.livelymccabe.com.