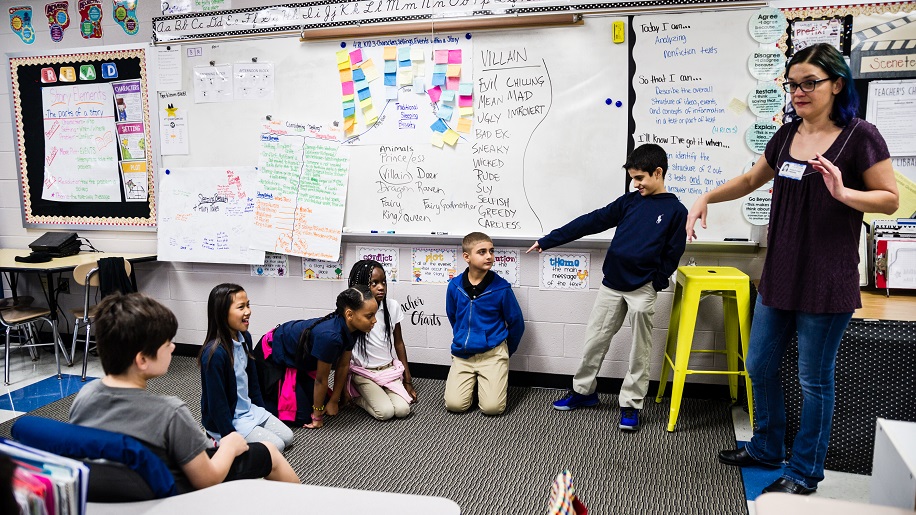 Teaching artist Anna Gorisch sets the stage for students, asking them to describe clues as to who the villain is. Photos by Mimosa Arts.

By DeeGee Lester, Director of Education for The Parthenon
December 2017

The great joy of learning lies in discovery. Since its inception in 1981, the Tennessee Performing Arts Center’s ArtSmart has enriched classroom curriculum and helped students discover the tools they need to have a meaningful encounter with a live arts experience. This deeper drive is facilitated by TPAC teaching artists who arrange three visits to participating classrooms at no cost to schools.

“This is not acting class,” says teaching artist Anna K. Gorisch, an accomplished performer and playwright. “And we’re not just sticking them on a yellow bus to go and see a performance.” Instead, ArtSmart uses the principles of Aesthetic Education as a way to engage and empower students as active theater-goers, tapping into the intimate and magical bonds between performer and audience.

Recently, Gorisch worked with teachers and students at Shayne Elementary in preparation for TPAC’s Sleeping Beauty, an interactive, multimedia treatment of the classic fairy tale created by David Gonzalez.

“I begin by exploring the work of art, in this case Sleeping Beauty, looking for elements that resonate on a deep level, and then use those elements to create a line of inquiry that provides the foundation for the lessons that I bring to the students,” says Gorisch. “We’re exploring themes that have some universal depth, but you always want to be coming back to the work of art.” Playing off advice from Pulitzer-winning playwright Marsha Norman — “when experimenting with ideas, if you find something that makes you uncomfortable, you’re onto something” — Gorisch decided to explore the idea of a villain as a complete human being.

After presenting their tableau, the group listens as their peers describe their observations and interpretations.

In the first of three lessons for fourth-graders in Caroline Marks’s classroom, Gorisch led students in building a foundation for exploring fairy tales and the creative process. Starting with the initial question “what kinds of characters do you commonly find in fairy tales,” students walked around using interpretive movement and a sudden freeze-frame “snapshot” to reflect characters ranging from a prince/princess and a fairy to a villain. The focus was on the body and facial expression and a descriptive follow-up discussion beginning with the phrase “I felt like…” As villains, student responses ranged from the expected (“I felt evil”) to the abstract (“I felt the need to hide or get smaller, to be stealthy so they couldn’t see me.”).

As students work through the activities, they become more engaged, more invested. “Sometimes the kids will lead you,” says Gorisch. When asked to describe kinds of villains, the students offered typical answers, including robbers, bullies, and kidnappers, until one boy mentioned a tornado as a possible villain. “It was a surprising response,” says Gorisch, noting the human tendency to offer human names and traits to devastating weather phenomena such as Hurricane Katrina.

Building on their movement and snapshot freeze-frames, students next worked in teams of four to six kids to create their own freeze-frame, capturing the moment of a villain in action. Prompted by the reminder that “you are the author,” each group created their own scenario and offered to the class the precise moment when their villain is doing something bad, holding those poses to communicate so the audience can interpret clues of both the moment and the characters involved. Students in the audience reflect their understanding of the scene with comments, each starting with, “I noticed that…”

One group focused their scenario on the actions of a bully threatening another student for his lunch money. Without commentary, the audience understood the scene: the poses of both threat and submission by bully and victim and the active participation of bystanders laughing and pointing. In this scenario, the victim included a handmade prop: a piece of paper imitating a $5 bill.

Following the presentations by each of the five groups, the class returned to their list of villains for discussion of the “why” behind acts of villainy. Gorisch goes through the list asking, “Why might someone become a bully, a robber, or a kidnapper?”

Students discuss what might cause a villain to go bad.

Eager hands were raised as the fourth-graders offered their own understandings about the reasons for someone choosing negative, cruel, or violent acts. Their responses reflected a thoughtful consideration of choice and consequence as well as a surprising level of empathy. The children listed the need to belong, to fit in or be “cool,” as well as group peer pressure to participate or, as with gang activity, the proof of loyalty and the prevention from leaving the group. Other responses focused on anger built over a lifetime of being misunderstood, disrespected, or bullied themselves. One student suggested that a kidnapper may be someone who was not able to have kids.

In the first day of their three in-class activities, these students utilized their own creativity and critical-thinking skills to see and appreciate characters as more than flat and one-dimensional, but as having levels of depth. Awareness of a level of depth for each of the characters in a performance gives these young audience members a special connection to the material and the creative process of both playwright and actors. In contrast to passively watching a movie or television show, they can embrace the power of live performance as a robust and magical give-and-take between actors on the stage and the audience members surrounding them in the dark.

Like Sleeping Beauty awakened by a kiss, TPAC’s ArtSmart has, over 36 years, awakened young people to a lifelong appreciation and love for live performance.

For more information, visit our Education and Community section.