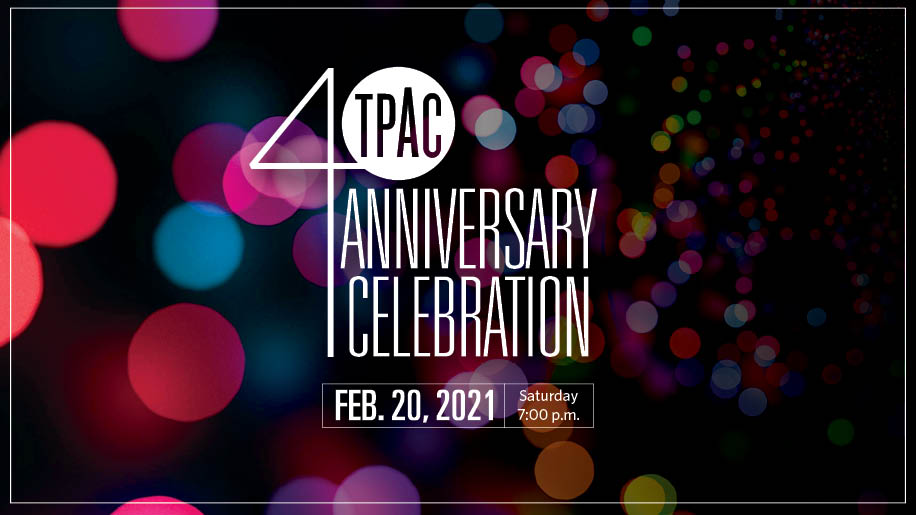 Join us for this virtual benefit celebrating TPAC’s 40th Anniversary!

Produced by award-winning director, Matt Logan, and filmed by MA2LA in TPAC’s Polk Theater, the virtual presentation will celebrate the nonprofit’s 40-year history in bringing the best in performing arts from around the world to Middle Tennessee while providing a vision of hope for the organization’s future success.

Tamiko Robinson Steele is a wife, mother, actor, and performance coach. She holds a degree in Speech Communication & Theater from Tennessee State University. A few of her awards include: 2011 Best One Woman Show (Miracle In Rwanda), 2017 Best Nashville Theatre Actress, 2018/2019 Top 3 Best Nashville Actor by Nashville Scene, and Best Actress at the International Black Film Festival. Most recently, she has been seen as Olivia Goodsmanson in the Lifetime Movie Networks A Welcome Home Christmas. Some regional theatre credits include Stella in A Streetcar Named Desire, Little Becky Two Shoes in Urinetown (Nashville Rep), ZuZu in Dance Nation (Nashville Story Garden), Mama/Terri in Ghost (Nashville Children’s Theatre), Unicorn in The Lion, the Witch and the Wardrobe, and Titania in A Midsummer Night’s Dream (Nashville Shakespeare Festival).
Photo by Bralyn Stokes

Susan Egan has delivered powerful impressions in theatre, film, television, and music. She headlined on Broadway in Thoroughly Modern Millie, won critical acclaim as Sally Bowles in Cabaret, starred in Triumph of Love and State Fair and received Tony Award® and Drama Desk® nominations for Best Actress as the original Belle in Disney’s Beauty and the Beast. She’s been seen on film in 13 Going on 30, Gotta Kick It Up, and many award-winning indies. She voiced the animated characters of Meg in Disney’s Hercules and Lin in the Academy Award-winning Spirited Away, and she is currently Rose Quartz on Cartoon Network’s Steven Universe. She spent two seasons on WB’s Nikki and guest-starred on Modern Family, HOUSE, NUMB3RS, NYPD Blue, Arli$$, Drew Carey, Party of Five, and Great Performances. Egan has over 400 solo concert credits with symphonies worldwide, more than 40 recordings and seven solo albums. In 2018, Egan formed Broadway Princess Party, LLC, with fellow Broadway stars Laura Osnes and Courtney Reed and musical director Benjamin Rauhala. They are currently touring their award-winning concert to kingdoms near and far. Egan is an accomplished master teacher in music performance, obsessive gardener, happy wife and mom of two.
Photo by Michael Hull

Singer, songwriter and actress from stage to screen, Diana DeGarmo has conquered it all and then some. This Southern belle always cooks up something special in blending together her country roots and love for fun and the dramatics. Her newest big band country feast for the ears, Gemini (2019), will have your toes tappin’, hearts racin’, and eyes wellin’ with 16 new tunes written by DeGarmo and longtime pal, Dylan Glatthorn. Her powerhouse vocals shot her to fame on American Idol and opened doors to her numerous Broadway shows, National & International Tours, a recurring role on The Young & The Restless, and more. DeGarmo has decades of entertainment experience that make her a force to be reckoned with no matter where she performs. Don’t let her sweetness fool you, she is power packed with lots of spice.
Photo by James Michael Vance

Hatty Ryan King is a Nashville-based performer and recent graduate from Lipscomb University with a BFA in Musical Theatre. She is making plans to move to The Big Apple within the year where she will attempt to put that BFA to good use. Regional credits include: Belle in Studio Tenn’s Beauty and the Beast, Meg in Studio Tenn’s Little Women (adapted by Kate Hamill) and Nashville Repertory Theatre’s Bloody Bloody Andrew Jackson. Educational credits include: Alice Murphy in Bright Star, and Celia in As You Like It (a collaboration with Nashville Shakespeare Festival). Her awards include: 2017 Nashville High School Musical Theatre Awards/Spotlight Awards Winner for Best Actress, 2017 Jimmy Awards Finalist and the 2020 First Night’s Award for Best Actress.
Photo by MA2LA

Nashville Ballet leads the way for dance and choreography in the state, by bringing classical and contemporary works from noted choreographers to the stage. Guided by the high standards of Artistic Director & CEO Paul Vasterling, Nashville Ballet presents a varied repertoire of dance paired with live music from The Nashville Symphony, ALIAS Chamber Ensemble, local singer-songwriters, and other talented collaborators. In addition to its four series performances at TPAC, Nashville Ballet performs for more than 30,000 children and adults at schools and community centers throughout Middle Tennessee. Nashville Ballet also operates its own school, which provides world-class instruction in ballet and other forms of dance for dancers of all ages. NashvilleBallet.com

Nashville Opera, Tennessee’s largest professional opera company and led by Artistic Director & CEO John Hoomes, is dedicated to creating legendary productions and transformative artistic experiences that entertain, elevate and shatter expectations. As one of the most successful regional companies in the United States, the company presents four mainstage productions performed in three different halls to 13,000 people annually. Nashville Opera offers numerous programs each season that demonstrate its commitment to artistic integrity, community engagement, and cultural impact. In addition to producing both traditional and contemporary operas, the company also believes in creating a future audience for the art form through education programs that reach thousands each year. It also aims to support new talent through the Mary Ragland Emerging Artist Program, and opportunity extended each season to four or more developing professional singers and one accompanist. By acting as both a torchbearer for the art form’s tradition and a celebrant of news works and talents, Nashville Opera strives to fulfill its mission and create a lasting impact on its audiences. NashvilleOpera.org

Nashville Repertory Theatre is Nashville’s premier regional theatre company. Founded in 1985 by Martha Rivers Ingram and Mac Pirkle and celebrating more than 35 years of presenting musicals, hot new plays and reimagined classics, Nashville Rep presents an ambitious season of spectacular main stage productions each year. It also serves the community with the Ingram New Works Project, The Nashville Rep Conservatory, professional development and educational programs, outreach activities, special events, and its props and costume rentals program. Every year, more than 20,000 people experience a Nashville Rep production, special event or outreach program. Employing over 200 actors, playwrights, designers, directors, musicians, technicians, and educators each year, Nashville Rep is the leading employer of theatrical artists in Middle Tennessee. The Rep has been recognized across Tennessee as a theatrical company of the highest quality including being named Best Professional Theatre by the Nashville Scene and the Best Local Theatre by The Tennessean. Its productions, actors, directors and designers have been honored with awards from Nfocus, the First Night Awards, Nashville Scene and The Tennessean, and Nashville Rep has been recognized by the Metropolitan Government of Nashville and Davidson County for 30 years of service to the community. NashvilleRep.org

Thank You to Our Partners